Hurricane Katrina and the Masonic Bible 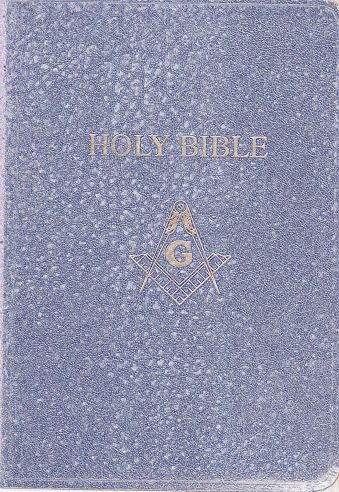 A few years ago I wrote a post on my personal Facebook page intended to be read by my fellow Masonic brethren about keeping your Masonic possessions safe, the post came to fruition as a result of an article that I read online about a Masonic bible (pictured above) which was for some reason not taken care of by its owner, it was left unprotected inside a garage in the lower Ninth District in New Orleans, Louisiana. On August 29, 2005 Hurricane Katrina (One of the worst Hurricanes in U.S. history) hit New Orleans causing massive destruction in its path including devastating flooding as a result of rising waters from Lake Pontchartrain which desolated the Ninth District, the bible was reportedly pushed out of the now destroyed garage by the flood waters to a spot five miles North of its original location and was found two months later underneath a pile of mud, the blue leather cover and gold lettering were faded and the inside pages were water damaged, with no one claiming it the Bible was said have been return to a local lodge in New Orleans to be restored, unfortunately since that Facebook post I've heard nothing further about what happened to or where the bible is currently located.

The point of this post my brothers is please don't
think that your Masonic treasures are not important enough to protect, you need to make sure that anything that you have which is Masonic including your Membership certificate, Masonic Bible, rings, aprons etc...are protected someplace like a home or office safe or in a bank safety deposit box.
Posted at 12:00 AM
Email ThisBlogThis!Share to TwitterShare to FacebookShare to Pinterest