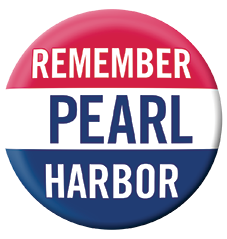 The 21st Masonic District website will remain dark until 11:59pm.in observation of the remembrance,
only this post will be visible, all other posts, pages and links are disabled until that time.

Today marks the 80th Anniversary of the attack on Pearl Harbor Hawaii by the military forces of Japan, in his speech to a joint session of Congress President Franklin Delano Roosevelt said "December 7, 1941, A Date That Will Live In Infamy". Historic records show that over 3,500 military and civilians died and over 1,000 were wounded including those who were at Naval Station Pearl Harbor, onboard the battleships, USS Arizona, USS California, USS Cassin, USS Downes, USS Nevada, USS Oglala, USS Oklahoma, USS Tennessee and the USS West Virginia. Four days later Japan and Germany declared war against the United States who was forced to enter World War II despite wanting to remain neutral.

We ask you as an individual to stop for a moment or two to remember, reflect and pray for those who sacrificed their lives to protect our country. It is also asked of Masonic lodges, not just those in the 21st Masonic District who have a Stated Communication on December 7th that your officers, wardens and brethren observe a moment to bow your heads and conduct a one minute moment of silence.